The Northern Counties was founded in 1943 at a time when there were only two other Clubs devoted specifically to Staffords: the Staffordshire Bull Terrier Club in the Midlands and The Southern Counties Staffordshire Bull Terrier Club catering for fanciers in the South of the Country.  It was surprising that anyone could even contemplate starting a dog Club in the middle of a World War, but it did manage to kick-off with only fifteen members, paying a fee of five old shillings single. 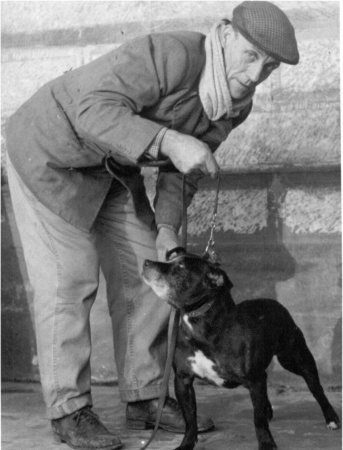 At first the Club was heavily dependant upon the support of the Staffordshire Bull Terrier Club, who acted as sponsors for the Club's very first Shows. Finances were a constant worry and many committee minutes register that a 'whip round' of committee men had to be made.

The first Show was held on the 13th November 1943 and it showed a loss. However by the third show there was an entry of 61 animals and it showed a profit of just 4 shillings. The headquarters throughout the War was Leeds and the first post-war Annual General Meeting was held in the Golden Lion Hotel, Lower Briggate. After 1946 however, meetings and Shows have been distributed throughout the Yorkshire region: Halifax, Huddersfield, Sheffield, Wakefield, Doncaster and Barnsley have all hosted Northern Counties events at some time or other.

At first the Club catered for enthusiasts from the other side of the Pennines as well as from Yorkshire.  But in 1946 the North West area had enough fanciers to set up their own Club, centred around Manchester. Mutual support however continued to flourish between the two Clubs for many years. 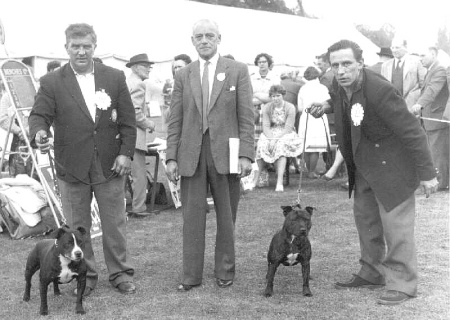 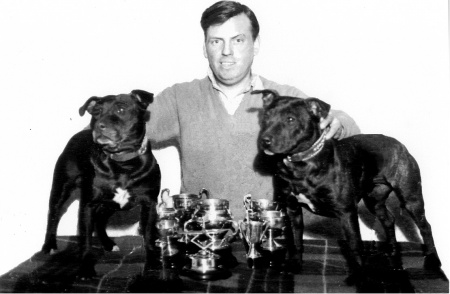 The Club sent delegates to the Meeting which drew up the 1948 Standard and in 1966 the Club became founder members of the Breed Council.

Because of the scattered area covered by the Club - after all even with the North West separated, we all know that Yorkshire is the Texas of the U.K.-  it took a number of years for the Club to gain Championship Show status. In fact this was achieved in 1975 with the Show being held at Shipley, near Bradford.

Throughout this time, Breeders in the area have produced some of the finest, most  influential and even record- breaking animals. From Doncaster came Rumbuster and his family, from Halifax Ch Bellerophon Billy Boy and Ch Son of Billy Boy were influential sires as well as being big show winners. Later Ch Knight Templar came to originate a successful family. Ch Reetuns Lord Jim made Champion in the U.K. and the U.S.A. Ch Judy of Brunaburgh was the first Stafford Bitch to win Best of Breed twice at Crufts. The Stafford who has sired most Champions - 15 -  is Ch Black Tusker. Although campaigned out of the East Midlands he was bred in Yorkshire from Yorkshire breeding. Later his son Ch Constones Yer Man  broke the, then, record for the number of CCs won and himself sired 11 Champions. Ch Jackstaff Fascination, probably the most influential red stud dog, was born and bred in the area. Ch Jackstaff Prima Donna is the only Stafford Bitch to have won a terrier Group  at an All Breeds Championship Show. The list could go on and on but perhaps the most unique record coming out of the Northern Counties was that of Ch Pal of Aveth C.D.Ex.  Born in 1948, he was from Yorkshire breeding, lived in Bradford and is still the only  dual Champion the Breed has ever produced.